One of the earliest metaphysical problems concerned permanence and change. To the early thinkers, the world contained things that appeared to change; yet, these very same things also possessed a certain endurance and permanence.
These changing and permanent qualities seemed to give the world a sense of inconsistency. If everything changed, then nothing was permanent, and if nothing were permanent, nothing could be studied or understood. But if the world contained a permanent entity, then it could not change or account for any change that took place in the world.
The Greek philosopher Heraclitus argued that everything in the universe changes (everything, that is, but the principle that everything changes). He was the oft-quoted philosopher who claimed that it is impossible to step into the same river twice because by the time one steps into it again, the river has changed; it’s a different river entirely.
This argument was stretched to the limit by Cratylus, who went so far as to claim that one cannot even step into the same river once because by the time the step is taken, the river has changed! Cratylus even refused to engage in conversation because by the time the speaker had finished his sentence, the words, the speaker, and the listener had all changed. He allegedly used to wiggle his finger to acknowledge that he’d heard something. If everything is in a constant state of change, however, then there is no way to make any sense of the world because there is nothing lasting to investigate. Viewing change as a fundamental characteristic of the universe was, therefore, problematic, but the notion that everything remained the same also posed some serious challenges.
Parmenides argued that everything in existence is permanent and unchangeable. Needless to say, anything that is unchangeable is not subject to the impact of happenings.
The only property that unchangeable entities can have is that of existence. The single thing that can be said of the permanent is that it is. Anything that is subject to change, Parmenides argued, goes through the cyclical stages of not existing, existing, and then, not existing again. A student of Parmenides, Zeno of Elea, devised some well-known paradoxes that supposedly demonstrated the contradiction of motion. I shall address this in more detail later.
A kind of resolution was made between the two schools of thought — permanence and changeability — when Democritus proposed the concept of the atomistic universe. Previous arguments had been concerned with whether the matter that makes up the world is infinitely divisible. People wondered if units of matter can be divided in two forever or if there is a smallest possible size — an indivisible unit. Democritus debated in favor of smallest possible units. This allowed him to argue that the world is both permanent and changeable.
The atoms are permanent, Democritus argued, because there is always the same number of atoms in the universe.
The relation between atoms does change, and it is this flux in relation and distribution that accounts for changeability.
Ultimately, however, Democritus chose to side with Parmenides and claim that the world is basically unchanging; the movement of atoms merely explains the change apparent in human perception while, in reality, the universe is fixed.
This is a good example of a metaphysical position offering a solution to a problem, reconciling the apparently contradictory views of permanence and change by introducing atomicity. Having a theory of atoms helped Democritus give an account of the universe that had both permanent and changeable features. Although the atoms were small, fixed objects, the movement between them was a changeable feature.
Democritus adopted a position on one metaphysical feature of the universe—claiming atomicity was correct over infinite divisibility — and then used this position to explain how the world could be permanent and, thus, capable of investigation while still being able to account for the changing features of the world. The reason why this should be thought of as a metaphysical argument is because there was no way for the Greeks to go out and test this idea. It would be two thousand years before man had the technical ability to test whether such an idea was true or false. We would now class an atomic theory as a scientific theory, but when there was no means by which an empirical investigation could be performed, such a theory would have to be considered metaphysical.

One of the easiest examples which describes Plato's Theory of Forms can be found in mathematics. Think of the line as a … END_OF_DOCUMENT_TOKEN_TO_BE_REPLACED

Plato was born in 428 BC and was a prolific writer for some fifty years. The general philosophical position to which … END_OF_DOCUMENT_TOKEN_TO_BE_REPLACED

In the previous post we saw how Democritus proposed an atomic theory of matter. Then along came Aristotle who offered an … END_OF_DOCUMENT_TOKEN_TO_BE_REPLACED 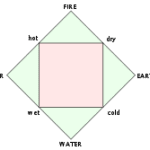 The best way to approach an understanding of metaphysics is with the use of an example, so let's begin by looking at the … END_OF_DOCUMENT_TOKEN_TO_BE_REPLACED